The following machine names are suggested:

The EU-IM-TF has agreed on a variety of conventions to facilitate the integration of the code modules across EFDA. In the following the most important conventions are explained in detail to remove confusion and avoid ambiguity. For more physical detail than that represented here see F Hinton and R Hazeltine, Rev Mod Phys 48 (1976) 239-308, or R Hazeltine and J Meiss, Plasma Confinement (Addison-Wesley, 1992).

There are generally two choices for defining a right-handed coordinate system in a toroidal geometry with the following coordinates:

Remaining consistent with ITER, the EU-IM-TF has chosen to adopt the right-handed system 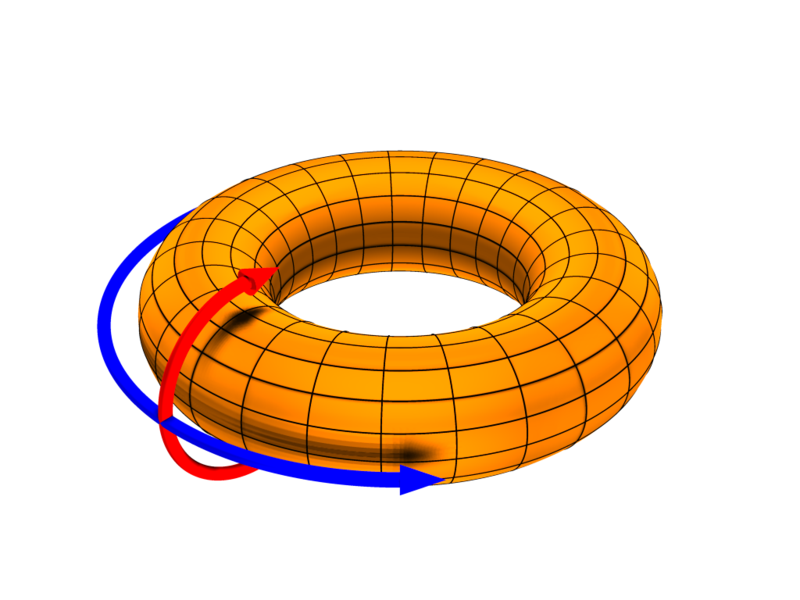 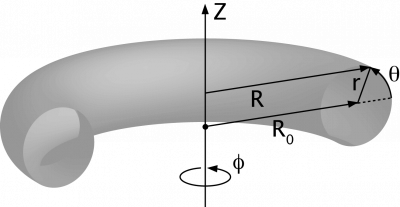 8.2.2. Representation of the Magnetic Field and Current¶

Generally, the magnetic field is described in terms of two scalar fields as it is divergence free. If the field is also axisymmetric then MHD equilibrium demands these are functions of each other. In the EU-IM-TF the relevant quantities are \(F_{{\rm dia}}\) and \(\Psi\) and the representation is

The current given by Ampere’s law is

where the latter is often expressed in terms of the “delta-star” operator, \(\Delta^* = R^2 \nabla \cdot R^{-2} \nabla\). These are not the toroidal field and current but the toroidal field and current multiplied by \(R\) respectively. The total plasma current \(I_p\) is the integral of \(J_{\phi} / R\) over the poloidal cross section (usually, but not always, over the closed flux surface region only).

The toroidal flux \(\Phi\) is the integral of \(B_{\phi} / R\) over the region enclosed by the flux surface. Due to axisymmetry it is also a volume integral

All volume integrals are understood as integration over the region enclosed by the flux surface. They are therefore flux quantities (pure functions of \(\Psi\)). The units of \(\Phi\) are volt-seconds, or Webers (Wb).

The poloidal flux is \(\Psi\) due to the construction of \(\bf B\). The factor of \(2 \pi\) ensures this is not Wb per radian (the more usual quantity \(\psi\) used as a covariant toroidal component of the magnetic potential is in Wb/radian; the factor of \(2 \pi\) results from integration over one angular circuit). Note that the poloidal flux \(\Psi\) and its equivalent per radian \(\psi\) are often used equivalently in the literature.

The magnetic pitch parameter is defined in terms of the flux components:

which is a flux quantity. This definition is the same as saying the magnetic pitch is given as the number of toroidal cycle a magnetic field line traverses per unit poloidal cycle. It is also called the local safety factor for MHD stability reasons (here, “local” means local to a given flux surface). Equivalent relations often seen depend on the definition of coordinates. These are given for straight field line coordinates, below.

With the above definition of the toroidal coordinate system and the magnetic field, the following sign relationships ensue (where increasing and decreasing refer to going from the magnetic axis to the separatrix on the outboard midplane):

The current EU-IM convention (described above) is number 13, while the ITER convention is 11.

A Fortran library has been developed for transforming the equilibrium cpo between different COCOS. The source is found in

and the actor is

In general, the flux surface average is the operation which annihilates the magnetic derivative \({\bf B} \cdot \nabla\) and acts as an identity operator on any flux quantity. It can be proved that this results in a volume derivative of a volume integral (alternatively one starts with the latter property and then proves the former, as the above Ciemat reference does). The flux surface average of a scalar and divergence of a vector are given by

where \({\bf G} \cdot \nabla V\) is the contravariant volume component of the vector \({\bf G}\). It follows that the flux surface average is an angle average weighted by the volume element \(\sqrt{g}\)

for any choice of toroidal and poloidal angle as well as radial coordinates, where \(g\) is the determinant of the covariant metric tensor components in those coordinates. Note in general \(G\) is not an axisymmetric quantity so the integration is actually over both angles.

For more detail see the above references.

8.2.8. The Toroidal Flux Radius as the Radial Coordinate¶

where \(B_0\) is the reference (vacuum) magnetic field value. Note that \(\rho_{{ \rm tor}}\) is a positive quantity which has units of meters. For several applications the volume radius \(\rho_{{ \rm vol}}\) is also used. It is a normalised radius going from 0 to 1 and is defined as

where LCFS refers to the last closed flux surface. Both should be defined in the equilibrium CPO (as well as \({ \tt volume} \equiv V\) itself).

The parallel current is different from this due to the finiteness of the poloidal current and magnetic field. Generally the correction is \(O( \epsilon^2 / q^2)\) which is usually a few percent (but not in a spherical tokamak). Using the representations for \(\bf B\) and \(\bf J\) given above we find

This form has been chosen due to the natural use of the flux surface average \(\langle{\bf J} \cdot{ \bf B} \rangle\) in neoclassical theory and the magnetic flux diffusion equation (see the Hinton and Hazeltine reference above).

A variety of modules in the EU-IM-TF use straight field line coordinate systems to represent the closed flux surface region. To guarantee consistency with the definition of the poloidal flux and the magnetic field representation given above, a standard definition of the coordinate volume element follows. This is the same sense as the usage of the term “Jacobian” in the CPOs (note many papers use the inverse volume element as the “Jacobian” by contrast). Here, “straight field line coordinates” refers to the use of the right-handed coordinate system \((\Psi, \theta, \zeta)\) with the poloidal flux \(\Psi\), the straight field line angle \(\theta\), and the toroidal angle \(\zeta = - \phi\). Therefore, \(\theta\) has the same orientation as the poloidal angle \(\theta\) in toroidal coordinates, while the toroidal angle \(\zeta\) is in the opposite direction of \(\phi\). This is standard usage generally in terms of “flux coordinates” (see Hazeltine and Meiss, above).

Note here that while the toroidal angle is the geometric one in the orientation sense of flux coordinates, the poloidal angle is not geometric. This results from the demand that the field lines be straight in the coordinate plane \((\theta, \zeta)\). The definition of this property is given by the specification of the ratio of contravariant components of the magnetic field as a flux quantity, which is one and the same with the pitch parameter (“local safety factor”):

where the minus sign appears by consistency with the primary definition in terms of the flux components as given above. This represents a magnetic differential equation for the poloidal angle:

The components of the magnetic field are then

This is the quantity labelled \({\tt jacobian}\) in the equilibrium CPO.

Out of the many definitions of plasma betas, the EU-IM has agreed to adhere to the following definitions: Following Wesson (p. 116), the poloidal beta is defined as an integral over the poloidal cross section

The toroidal beta is defined as

The normalized plasma beta is defined as

where \(B_{\rm p}\) is the poloidal component of the magnetic field. The (unnormalized) internal inductance is then defined as

where \(I = I(\Psi)\) is the toroidal plasma current enclosed by the flux surface \(\Psi\). The normalized internal inductance, as stored in profiles_1d%li is defined as

with the surface averaged major radius

The following entries in the equilibrium CPO are defined along the poloidal dimension (as dim2 in the case of a flux surface equilibrium, i.e. radial coordinate psi in dim1 and poloidal angle in dim2):

To ensure that physics modules produce identical results on various computer architectures and to avoid issues with double precision versus single precision interfaces, the EU-IM-TF has agreed on a set of standardized variable types. It is recommended that these types be used throughout all EU-IM modules, but at least for the interface definitions. The Fortran90 module defining the type standards itm_types.f90 is hosted by the project itmshared . To check out the relevant files please do

For Fortran90, the following standard types have been defined

To implement these types in your code, please add the following line to your modules

(More information about the EU-IM libraries.)

The EU-IM data base does not allow for setting data base entries directly to invalid in case they should not be set. Since the Universal Access Layer (UAL) always pulls out complete CPOs, i.e. complete data structures, of which not all fields may be filled, the problem arose of how to identify those fields which have not been filled. In the case of arrays, this is simply done by not associating the corresponding pointer. In the case of scalars, however, unique values for floats and integers had to be defined to identify empty fields. These values identify invalid data base entries and can be tested through comparison. The values for invalid data base entries in Fortran90 are defined below:

They have been found to be safely out of any physical range for the affected fields such that no accidental confusion with real values may occur. The Fortran90 module defining these values itm_types.f90 is hosted by the project itmshared . To check out the relevant files please do

This section concerns how to specify the origin of data in certain types of CPOs. The specification is performed using the datatype identifier. The following specifies the conventions of the allowed enumerated datatypes.

8.3.4.1. Example: How to fill coresource/values/sourceid¶

When filling in an enumerated datatype, like coresource/values/sourceid, it is recomended to use the parameters and functions built into the fortran modules associated with each such datatype. These modules are available as part of the UAL package. As an examples we may include the coresource_identifier:

Below you have an example of how to use these functions:

This example program, and similar examples for other enumerated datatypes, are available in:

Equilibria may be represented in a variety of different ways depending on which EU-IM module has calculated them and which module shall use them. To avoid ambiguity and to allow modules to check which type of equilibrium is stored in the equilibrium CPO, a unique grid identifier is stored in profiles_2d%grid_type. The grid identified currently consists of 4 strings (at 132 chars) with the following structure (array indices in Fortran notation):

The currently allowed values (integer and string) for the identifier of the grid type are listed below:

The currently allowed values (integer and string) for the identifier of the poloidal angle are listed below:

The EU-IM has agreed on a standardized way to bundle CPOs and control parameters inside KEPLER.